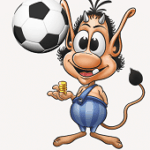 Football is without a doubt the most popular sport in the world. Each year the many competitions bring millions of fans to the TV screens and to the stadiums. We love watching our teams win and we love it even more when our favorite players scores a goal.

Football is also a big thing when it comes to gambling. You can place bets on your favorite sports events at a number of bookmakers and hope you get the winning result. But football is also a big part of online casinos. Such a popular theme is widely used in the casino industry for creating football themed slots. Pretty much every provider has at least one football slot in their ranks. So, without further ado, we present to you a list of the 7 most popular football slots you can try out at online casinos. 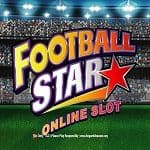 Football Star is a popular Microgaming slot, which is a part of a series of slots inspired by popular sports. The game has 5 reels and 3 rows, featuring a modern 243 ways to win design. It also uses the Rolling Reels feature, meaning that all winning symbols will disappear from the reels and new ones will land to take their place. This way you have a chance to win a big number of payouts, for the price of a single paid spin. The slot also offers players a number of bonus features, which can produce great payouts.

On reels 3, 4 and 5 you have a chance to land Stacked Wilds. They can produce the biggest payouts in the game and can land in several spins, creating a long streak of wins. You can also trigger the free spins bonus where each wining spin which occurs in a row will have an increasing multiplier added to the payout, up to a maximum of 10. 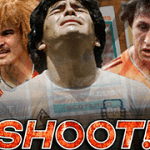 Shoot is an older Microgaming slot, which can be considered as a branded and a football slot at the same time. The game was inspired by the British Shoot Magazine and is still a popular slot among football fans even today. The symbols on the reels take you back to a golden age of football, where legends like Pele, Maradona, Beckenbauer and Best dominated the football fields. But, beside the popular theme the slot also has a lot to offer in terms of payouts and bonus features.

Land at least 3 Bonus symbols anywhere on the reels to trigger the Trade’em Multilevel bonus. Pick 4 cards of the 12 football legends and get instant cash prizes. You can also trigger the free spins bonus from this feature. You will need to hit the Spin button and be awarded with up to 35 free spins, which are played on a x2 win multiplier.

This NetEnt slot was released to commemorate the start of the Euro 2016 championship. The slot has great visual details and an interesting game play, like most other slots coming from the Net Entertainment factory.

Land 3 Scatters on reels 2, 3 and 4 to trigger the free spins bonus. This is an interesting bonus round where you compete against other teams for the top prize of the tournament. All you need to do is shoot the goals and defeat the opposing team to progress to the finals. The score is kept by special Wild symbols in red and blue colors. Land a blue one on reels 1 and 2 to land a goal or a red one on reels 4 and 5 for a miss.

Land at least 3 bonus symbols anywhere on the reels to trigger the bonus game. Become a goalkeeper and protect your goal to earn prizes. 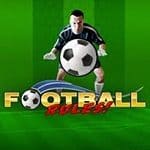 Football Rules is another great slot dedicated to the most popular sport in the world. This is an older Playtech slot, so expect to see a lower level of visual details as well as animations. But what Football Rules lacks in beauty it makes up for in payouts during the bonus round.

The Scatters don’t trigger a bonus round; they only award a cash payout of up to 50 times the total stake. In order to trigger the feature, you will need to land a Bonus symbol on reels 1 and 5. Once this happens you enter the bonus round and it’s time to test your skills against the goalkeeper. Choose one of the 6 balls on the screen and it will reveal the number of free spins. After that you need to choose the way you will shoot the ball to the goal and it will reveal the free spins win multiplier. After the shot is done the free spins bonus starts. You have a chance to re-trigger the free games in the slot indefinitely.

Religion of Champions Brazil is a great Pragmatic Play slot which was released just in time for the world championship in Brazil. The slot has attractive visual details and a very interesting audio. You can hear the roars of the crowd as you spin the reels, giving you a feeling like you’re watching the game from the stands.

In terms of bonus features the slot has quite a lot to offer. What’s interesting to note here is that the symbols can land stacked on the reels. In return you get frequent small to medium payouts, which come in handy if you’re wagering a big bonus. The game also has a free spins bonus triggered by landing 3 Scatters anywhere on the reels. You are awarded with 10 free spins and one of the player symbols becomes the Most Valuable Player symbol. When it lands on a reel it will expand to cover the entire reel, awarding scattered like payouts.

RTG has a lot of great slots in their offer and Football Frenzy is certainly one of them. The game completely captures the atmosphere of the stadium and draws you into the action. The visual details aren’t on a very high level, but this is to be expected, as Football Frenzy is an older slot.

During base play you can land Stacked Wilds on reels 1 and 5, via the Striker Symbol. All wins with a Wild will be doubled in size. You can play the game in Striker and Lucky mode, where you can win up to 8 free spins and a penalty kick. Hit the goal for increased payouts. 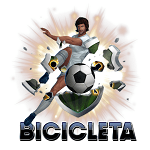 Bicicleta is a great slot inspired by the popular “Bicycle” kick. The slot has excellent visual details and comes with a variety of bonus features. Land a Trophy on reel 5 and you can win anywhere from 8 to 12 free spins or cash prizes of up to 1,000 coins.

Land the Trophy on reel 2 during the free spins and you can win 2 to 4 extra free spins, a cash payout of up to 1,000 coins or the Wild Reel feature. During the bonus a player will try to score a goal. If he does, then he will become a Sticky Wild for the remainder of the feature. Score as many goals as you can and get as much free spins as you can for bigger payouts.

This website uses cookies to improve your experience while you navigate through the website. Out of these, the cookies that are categorized as necessary are stored on your browser as they are essential for the working of basic functionalities of the website. We also use third-party cookies that help us analyze and understand how you use this website. These cookies will be stored in your browser only with your consent. You also have the option to opt-out of these cookies. But opting out of some of these cookies may affect your browsing experience.
Necessary Always Enabled

Any cookies that may not be particularly necessary for the website to function and is used specifically to collect user personal data via analytics, ads, other embedded contents are termed as non-necessary cookies. It is mandatory to procure user consent prior to running these cookies on your website.