Best Gambling Movies In Netflix For 2020 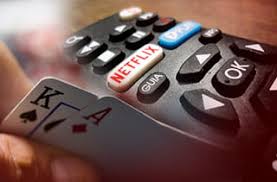 Netflix made possible what all of us couch potatoes dreamed of. Now we have a chance to watch any movie or TV show we want at the click of a button. An especially interesting category for us is gambling movies. We are always on the lookout for a new gambling title, but we also don’t mind watching the classics over and over again.

We managed to go through every gambling movie on Netflix and decided to share our list with you. We hope you enjoy watching these masterpieces as much as we did.

Adam Sandler is a great actor who we’re used to seeing in hilarious comedies. But his latest project is an action packed crime/thriller movie where we get to see him in a very different light. Taking on the role of Howard Ratner we witness the life of a jewelry dealer and a big time gambling addict. He struggles to balance his life between his work, his gambling problems and his family.

The plot starts when Ethiopian miners find a very rare black opal in a mine in Africa. The opal manages to find its way to Howard and catches the eye of NBA superstar Kevin Garnett. He offers Howard to take it for good luck at his game, while offering his Championship Ring as collateral. Howard agrees and pawns the ring right after Kevin leaves, managing to win $600,000 on a parlay bet. The troubles begin when the bet is stopped since he already owes a loan shark $100k.

In the end Howard manages to win $1.2 million but is killed by an enraged loan shark. The movie is a great example to what can happen if you don’t keep your gambling under control and get involved with loan sharks. For us, Uncut Gems is the best gambling movie on Netflix for 2020.

Maverick is an older, but still a great western comedy, starring Mel Gibson in the role of Bret Maverick. Released in 1994 it was originally based on the 1950s hit series by the same name.

The action in the movie starts with Maverick going from town to town collecting debts from his friends and playing poker. He’s raising enough money to enter a high stakes poker tournament where he plans to win and basically set himself for life.

On his travels he meets up with Annabelle Bransford, a fellow con artist, and Zane Cooper, a marshal hired as security for the big tournament. During the movie the trio lives through many comical situations, finally getting to the tournament which is held on a river boat.

20 contestants enter the tournament and every cheater is thrown overboard immediately. The last round of the tournament is between Maverick and Angel. In the last hand Maverick notices that the dealer is dealing from the bottom of the deck. He asks for a new deck and one card from the top. The card is an Ace of Spades giving Maverick a Royal Flush and to Netfxil one of the poker movies of all times.

Mississippi Grind is a very interesting movie which all gamblers and movie fans should watch. An interesting fact about this picture is that it was shot entirely on film, not with digital cameras. This gives in an authentic 70s vibe making it more realistic and allowing it to perfectly bond with the theme.

The story starts at a casino where Gerry and Curtis meet up over a poker game. Now Gerry is a problematic gambler down on his luck, who is getting ready to leave town due to gambling debts. Curtis on the other hand is a young vibrant gambler who luck seems to follow everywhere he goes. The duo decides to pair up and go on a Mississippi Grind.

They set out to travel down south all the way from Iowa to New Orleans, hitting casinos and dog tracks along the way. They have their ups and downs on their trip, winning and losing a lot of money. Finally, they end up playing craps at the tables and manage to get their bankroll up to $285.000. This is when Gerry, being the problematic gambler as always, suggests that they bet their entire bankroll on one lucky roll of the dice. The next scene is at a restaurant where the duo has a casual chat on what to do next, now that they’ve won half a million dollars.

Bugsy is a must watch gambling movie on Netflix. It is considered to be biography movie about the life story of notorious mobster Bugsy Siegel. Starring Warren Beatty and Annette Benning, the movie also tells a touching love story and all the trivialities which come with it.

The movie starts with Bugsy going to Los Angeles to take care of some business for Meyer Lansky and Charlie Luciano. While in town he meets and instantly falls in love with Virginia Hill, which at the time is a Hollywood starlet.

While conducting business Bugsy comes up with an idea to build a casino and hotel out in the Nevada desert. He manages to get $1 million in funding from his bosses and starts construction of the Flamingo Las Vegas Hotel Casino. The budget for the hotel is quickly broken through and Bugsy tries to do everything he can to finish it.

Once the hotel is finished the opening night is a disaster and $2 million of the original budget goes missing. Bugsy learns that Virginia stole it and ran away. This leads to the killing of Bugsy and Virginia returns the money to Lansky a week later. The money which Bugsy invested in the hotel casino generated over $100 billion of revenue by the 1990s. A

Rounders is a classic gambling movie starring Matt Damon, John Malkovich and Edward Norton. With such a strong cast it’s impossible not to get a great movie. Actually for many people is the best poker movie of all times. The action starts with Mike McDermott who is a very gifted poker player, dreaming of entering the World Series of Poker and playing with the best. But in an underground poker game he loses his entire bankroll to Teddy KGB and gives up on his dream. He enters law school and takes on a part time job, while living with his girlfriend.

His life is pretty calm until his childhood friend gets out from prison. Lester Worm Murphy immediately gets into trouble as he owes a considerable amount of money to a loan shark. The only way Mike can help him is by pairing up and playing poker. They manage to build a bankroll and the end game takes him back to the table with Teddy KGB. He manages to lure him into betting all in while holding an unbeatable hand. With the winnings Mike manages to clear Worms debt and goes on to take part in the World Series of Poker.